When I got home from work I felt like doing some work on the car, so I went into the out-house and found one of the two brake cylinders that I removed from the front left wheel last week, it looked well seized. 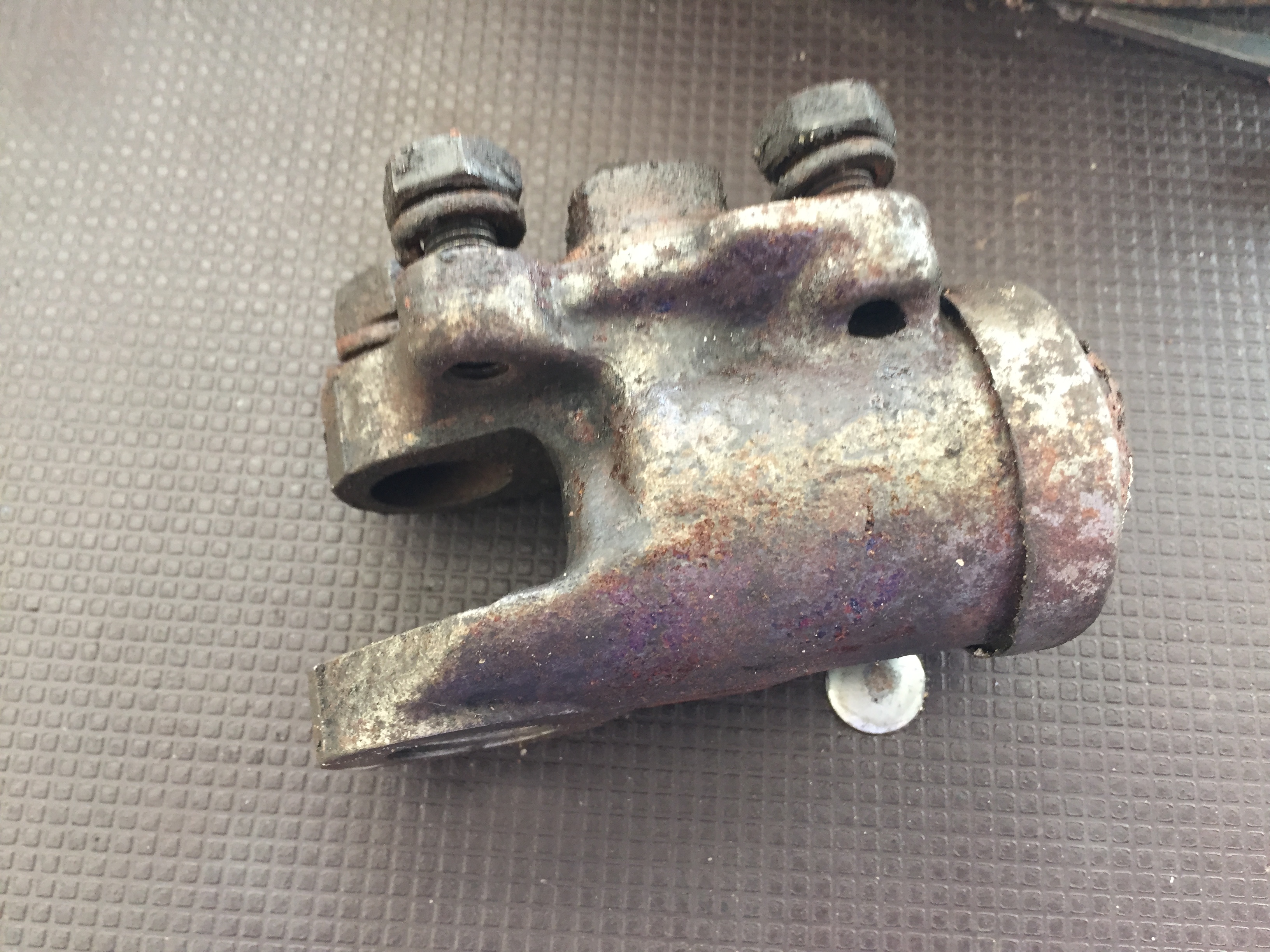 and here’s another view showing the rusted outer protective cap which sits on the rubber sheath dust cover. 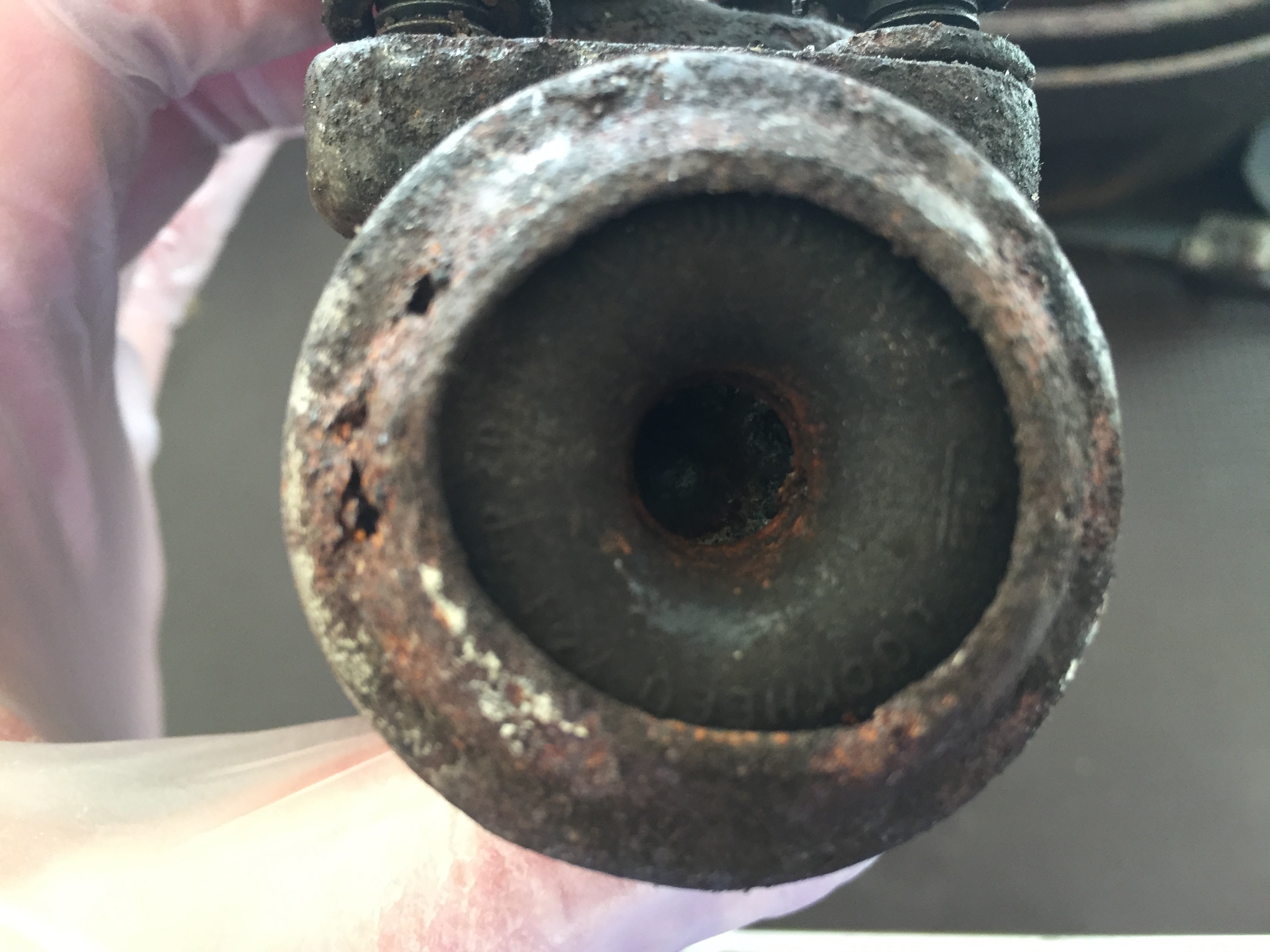 This brake cylinder is a mess, and I’ve not encountered this outer protective metal cover before, as you can see its in such a bad state it’s got holes in it even before I’ve touched it. 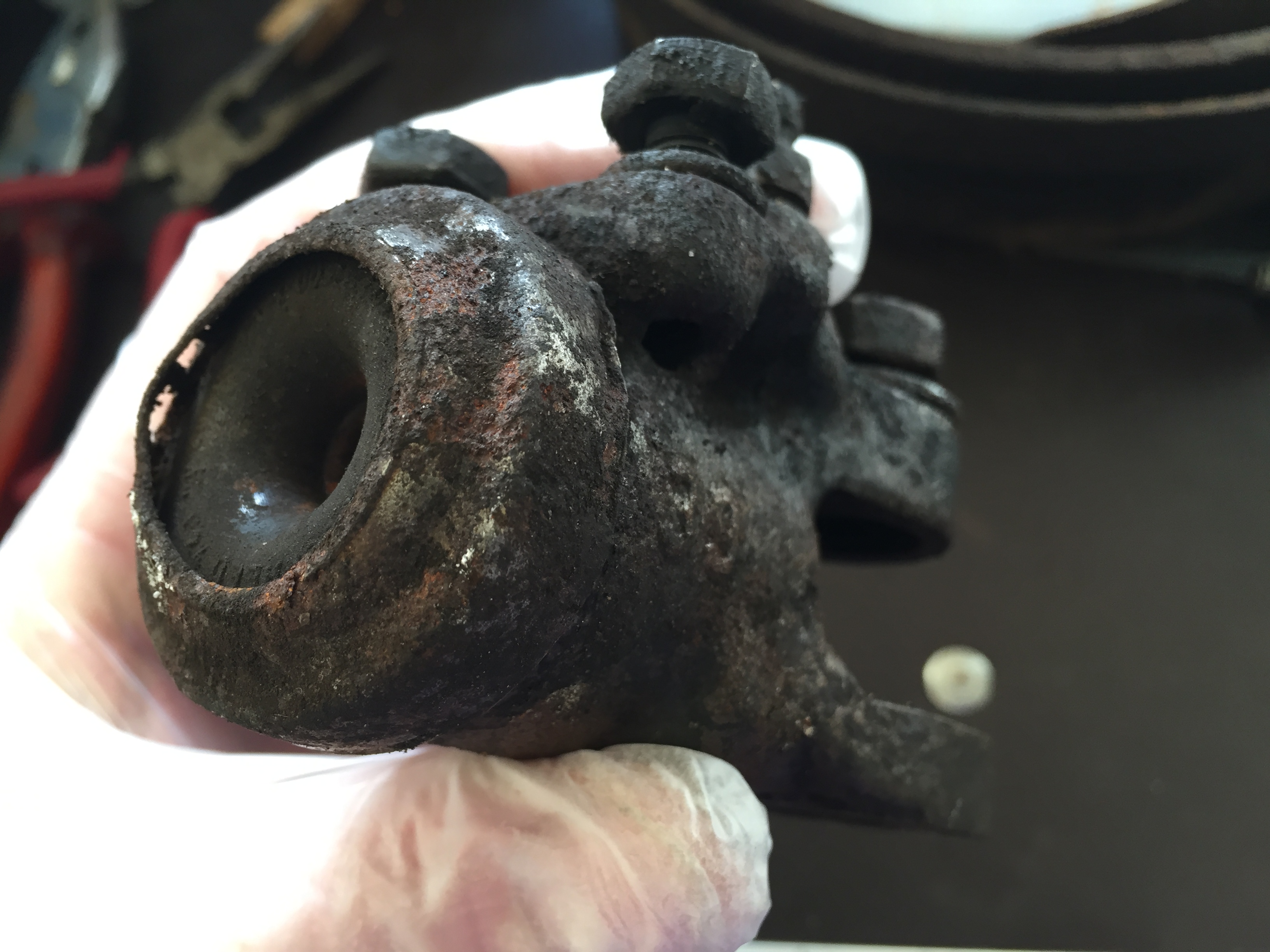 I tried to remove the metal sheath with gentle force and a flat blade screwdriver but it wouldn’t budge and the metal was very fragile, I feel it’s expendable but I’m not sure. Eventually I got it off but it cracked somewhat in the process, there was no other way, the rubber sheath ripped in two in the process too but that’s ok, I will replace that with a new one anyway.

Just look at the state of the piston and the cylinder, it definitely looks like it hasn’t budged in 30 years. 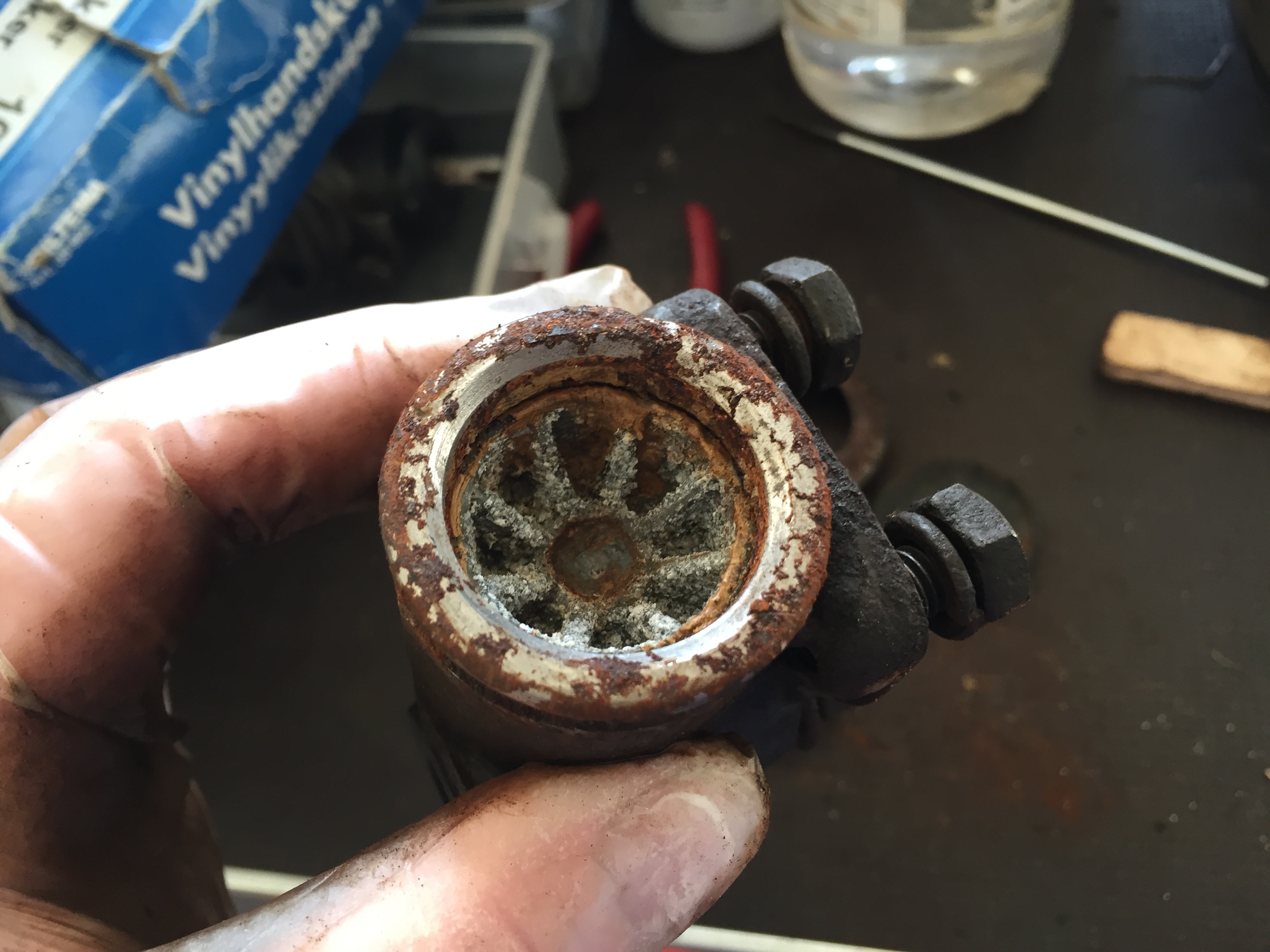 Here’s the protective metal sheath, you can see the holes clearly and the crack from the hole to the edge, I’m going to try and source replacements but on my other Ponton, the front brake cylinders only had the rubber sheaths so I don’t know why this one has this additional metal ‘cap’. 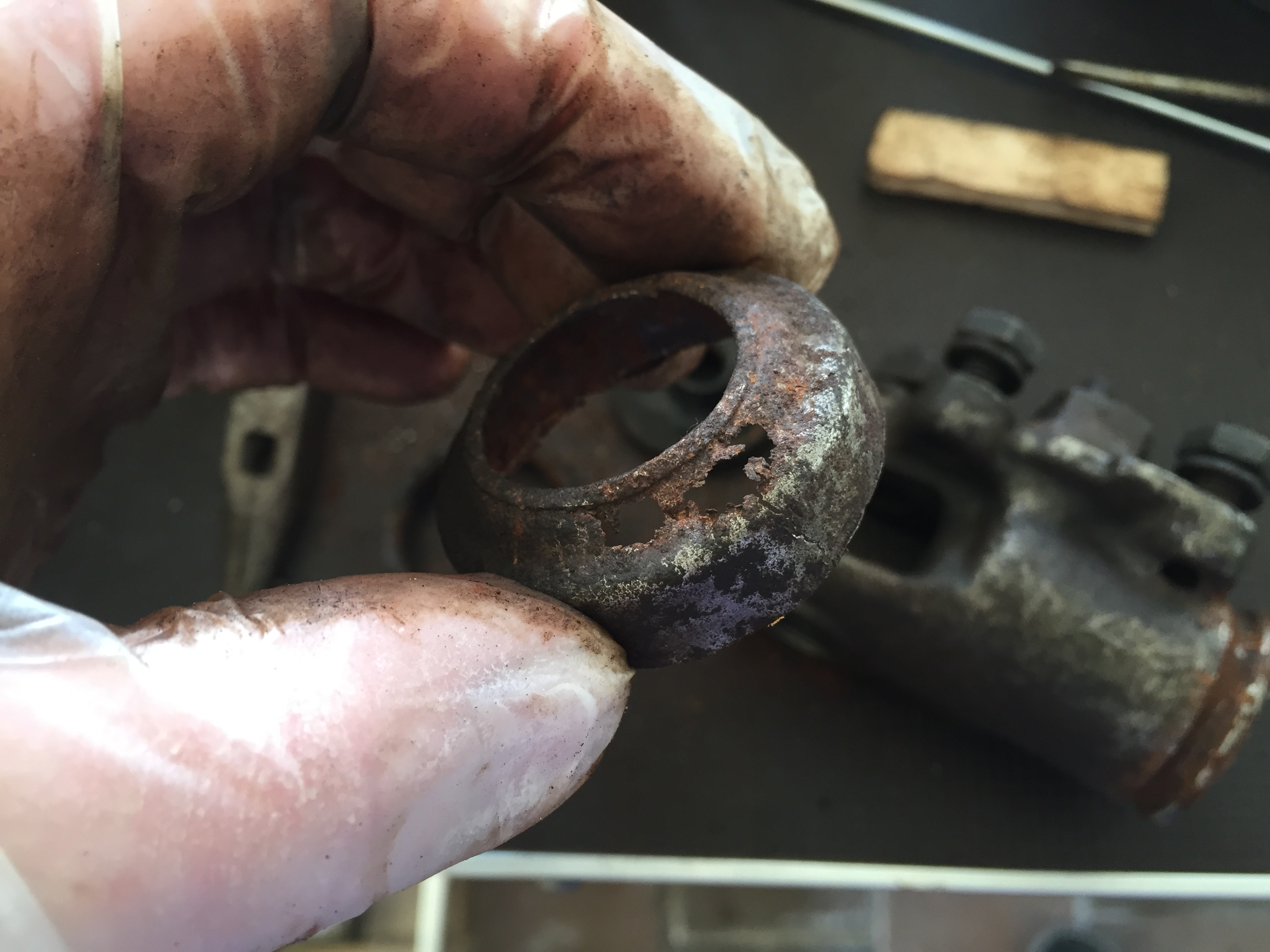 Here are those components all laid out after removal. Look at that rust and the split rubber sheath, it was past it’s best anyway. 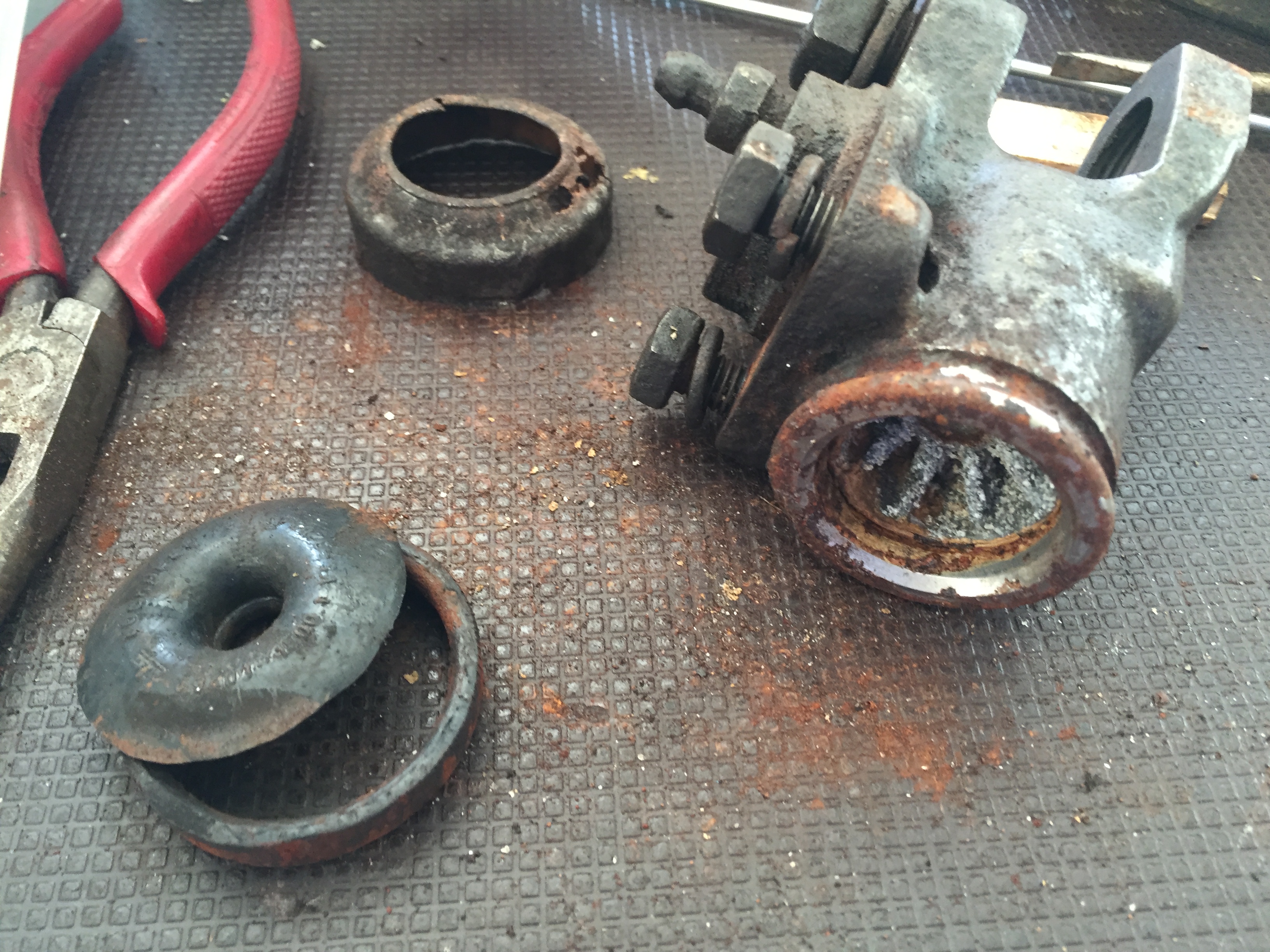 However after some sanding by hand with 150 grit sandpaper and oil this is what it started to look like, I did notice two indents or damage or ingress in the lip of the cylinder, so I don’t know if this cylinder will work going forward or whether I’ll need to replace it.

I hope it shouldn’t matter as the piston doesn’t contact this area and it will be protected by a new rubber sheath, but I won’t decide until I’ve done a full cleanup of this brake cylinder. 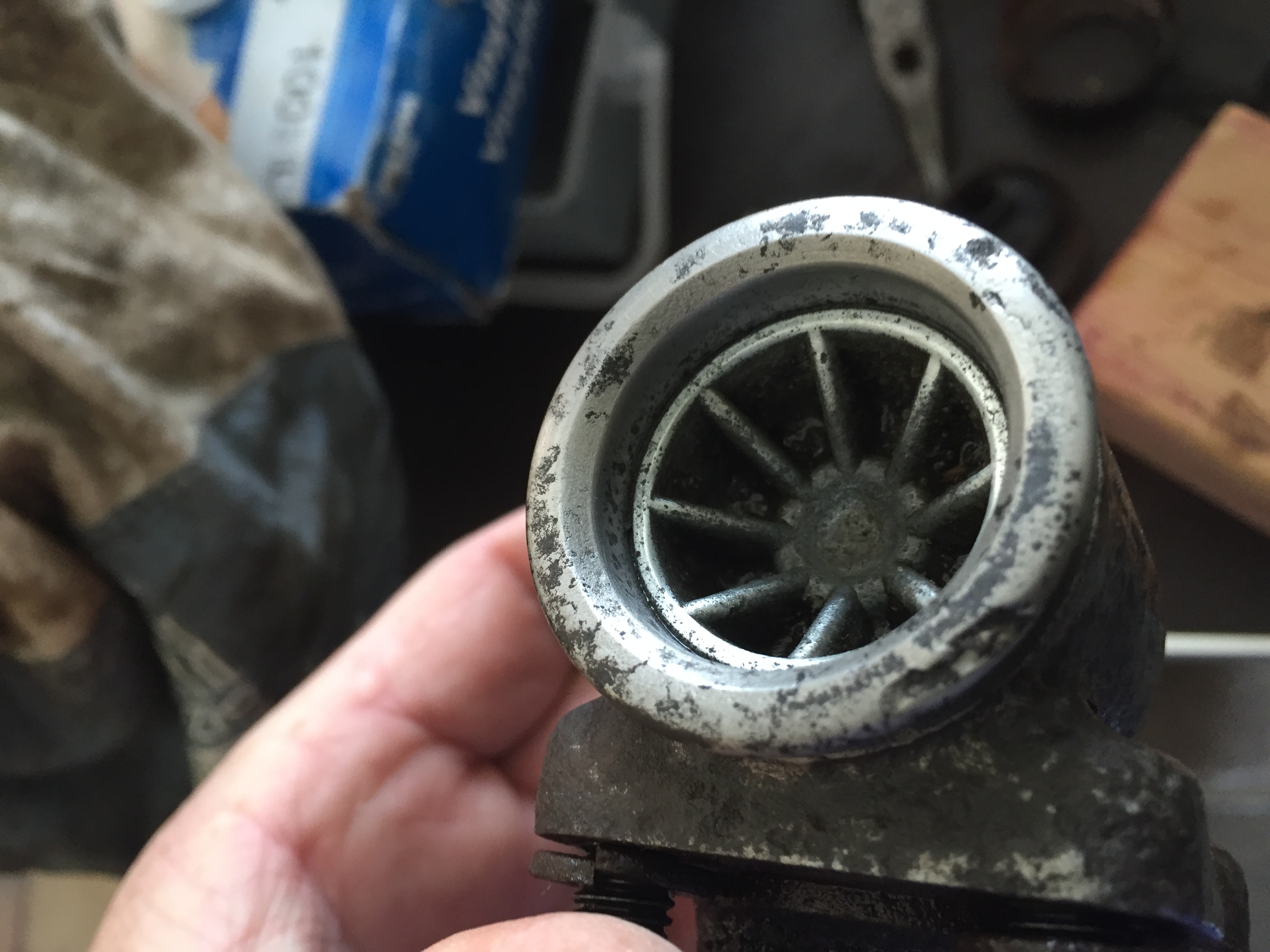 Another view of that damage. There’s actually another indent/ at the top of the cylinder lip also. 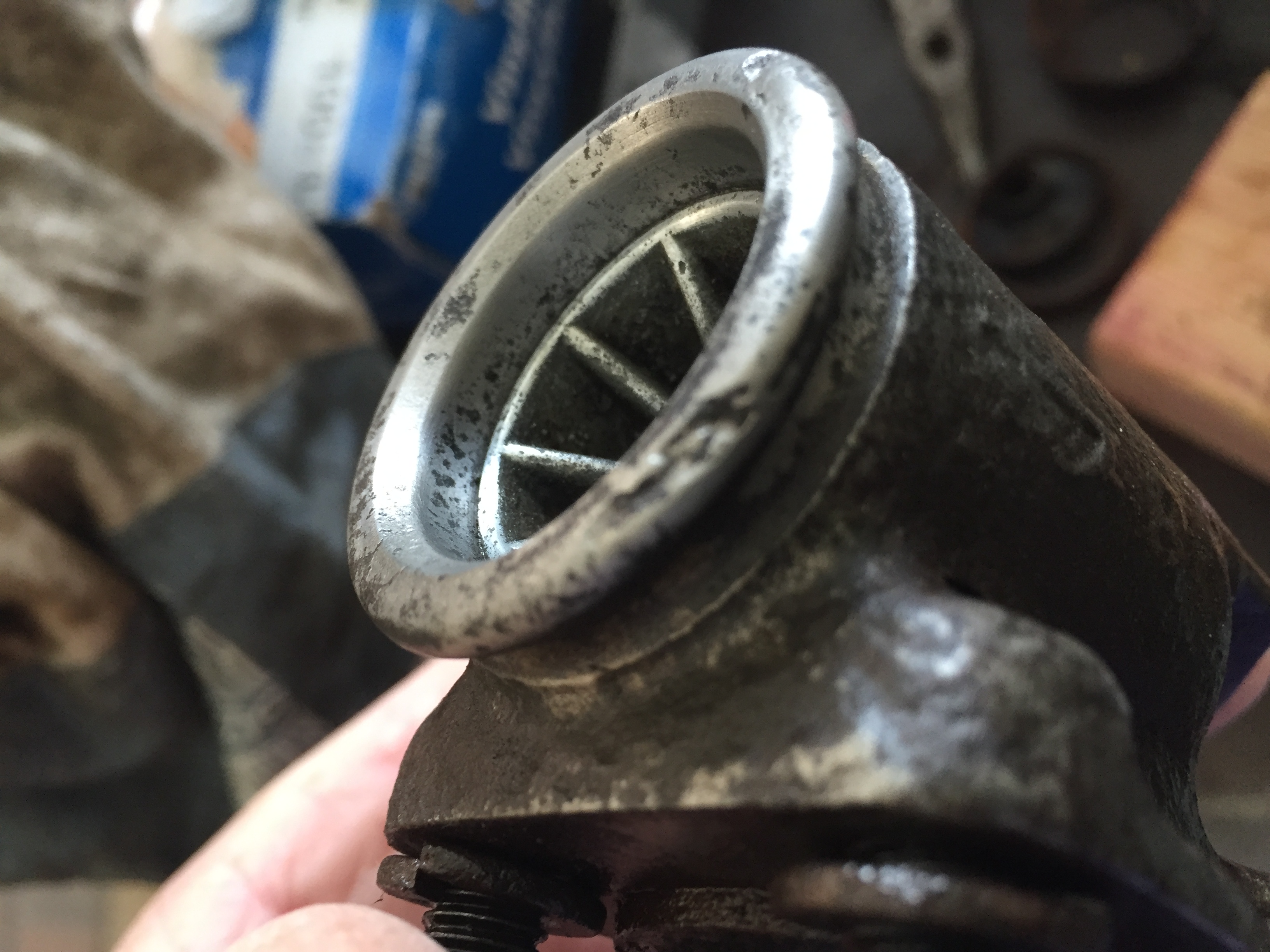 To try and make the piston move I whacked it with a hard bit of wood and made sure there was a wooden block underneath. It didn’t budge after several attempts and continued sanding. 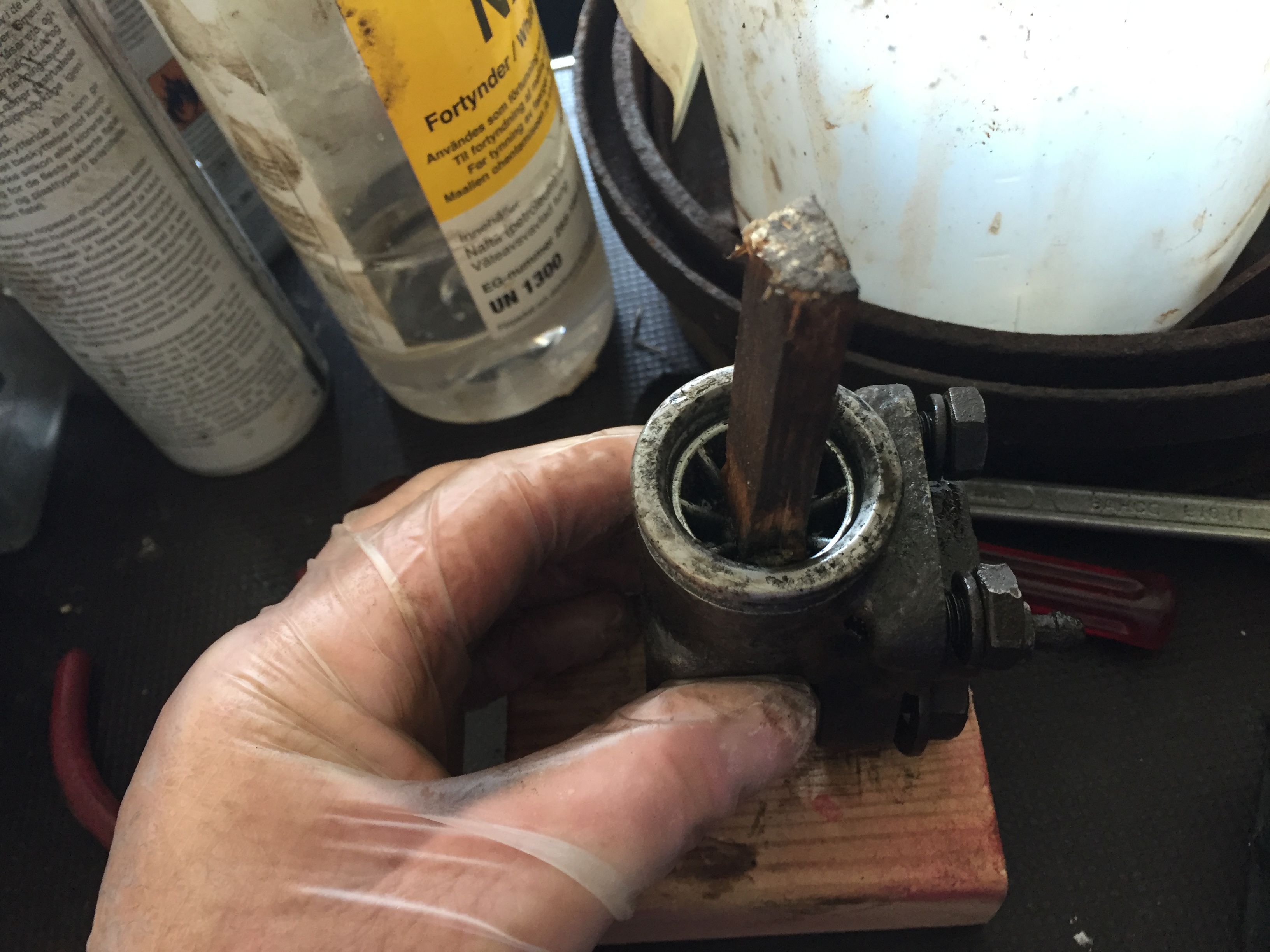 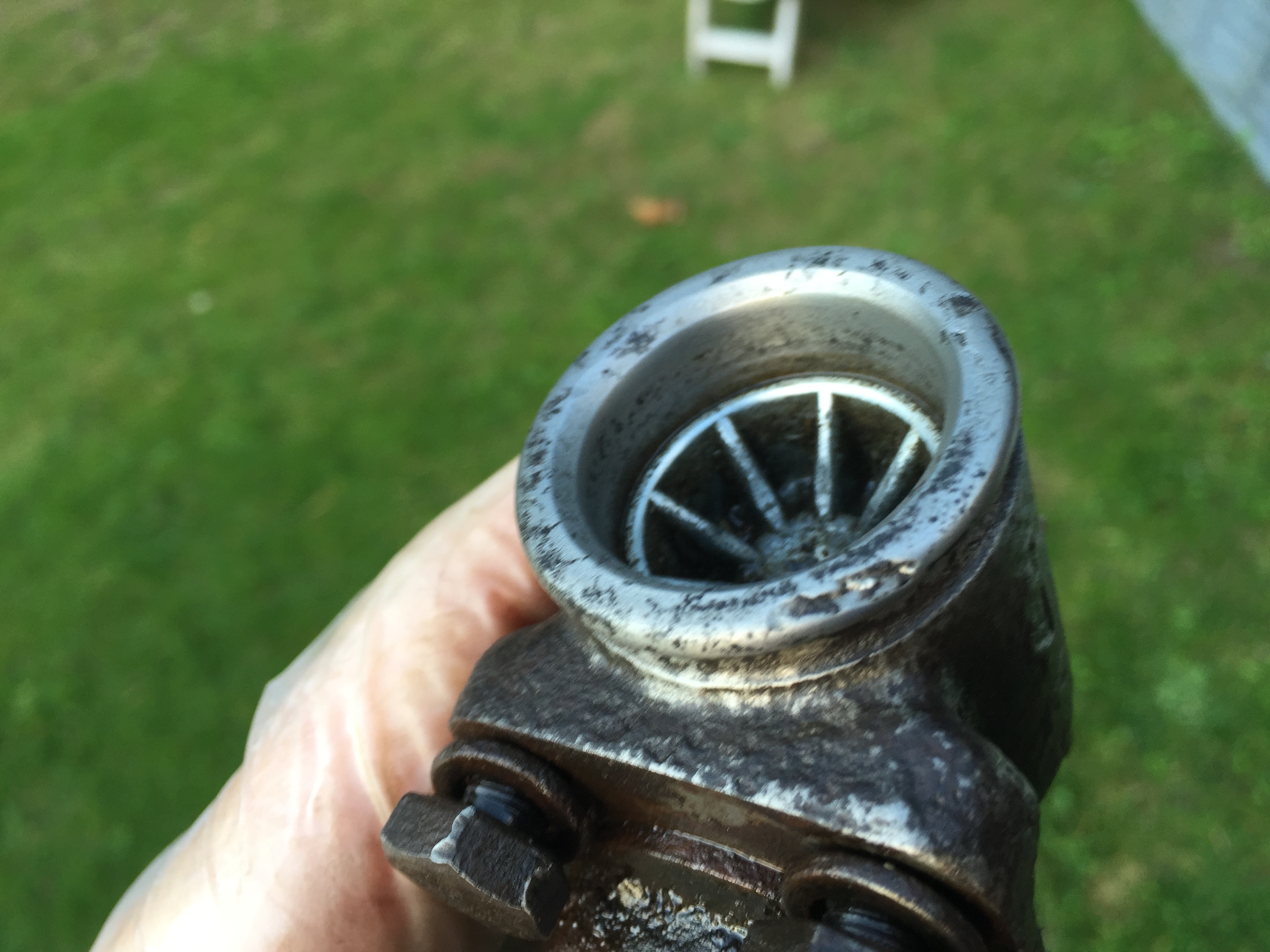 finally the lip is starting to look better, but you can see the damage to it here, I went through 4 pairs of gloves on this cylinder so far. 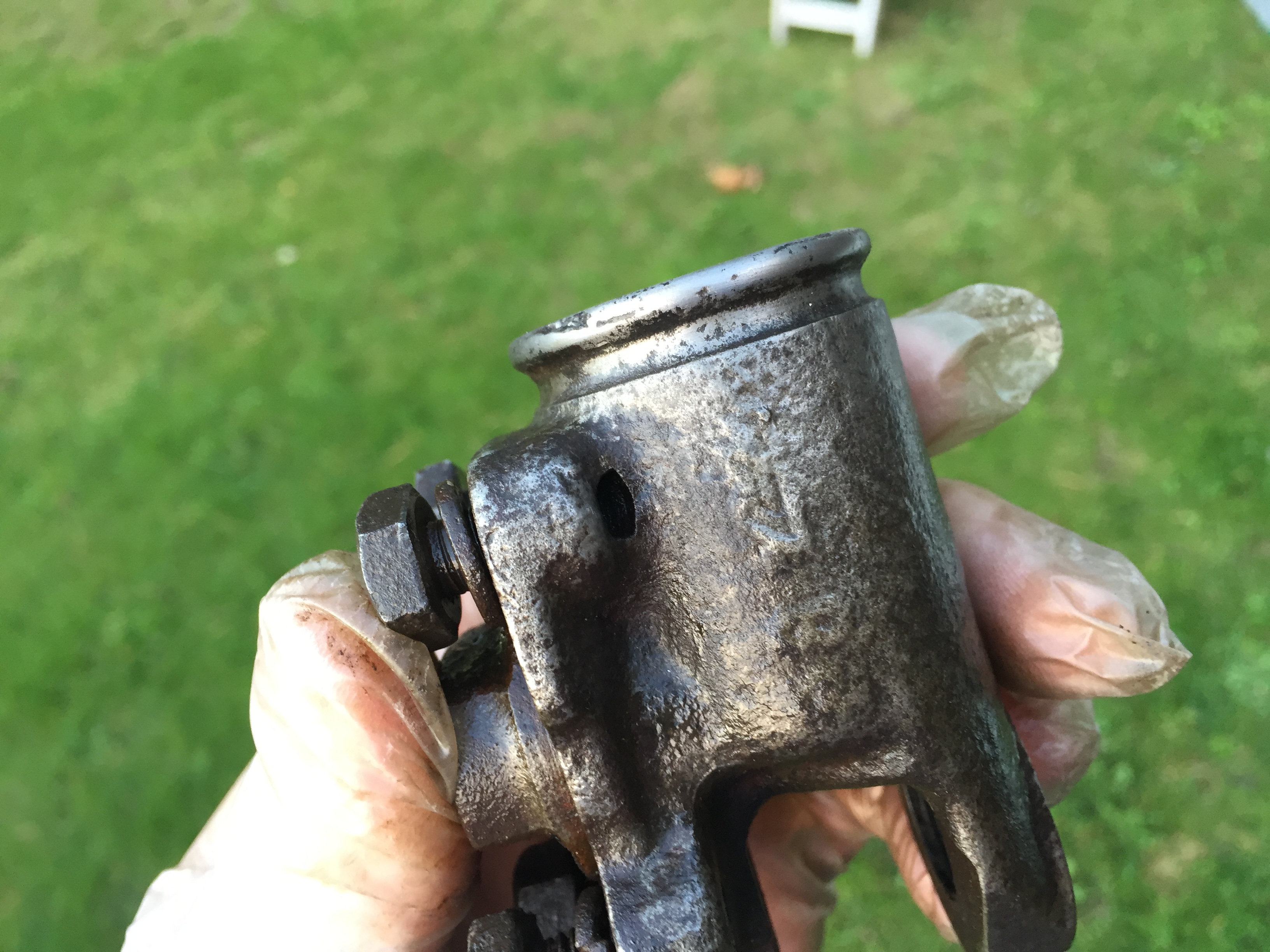 some more banging and sanding later, you can see that the piston ribs are slightly damaged via the wooden bit I used. 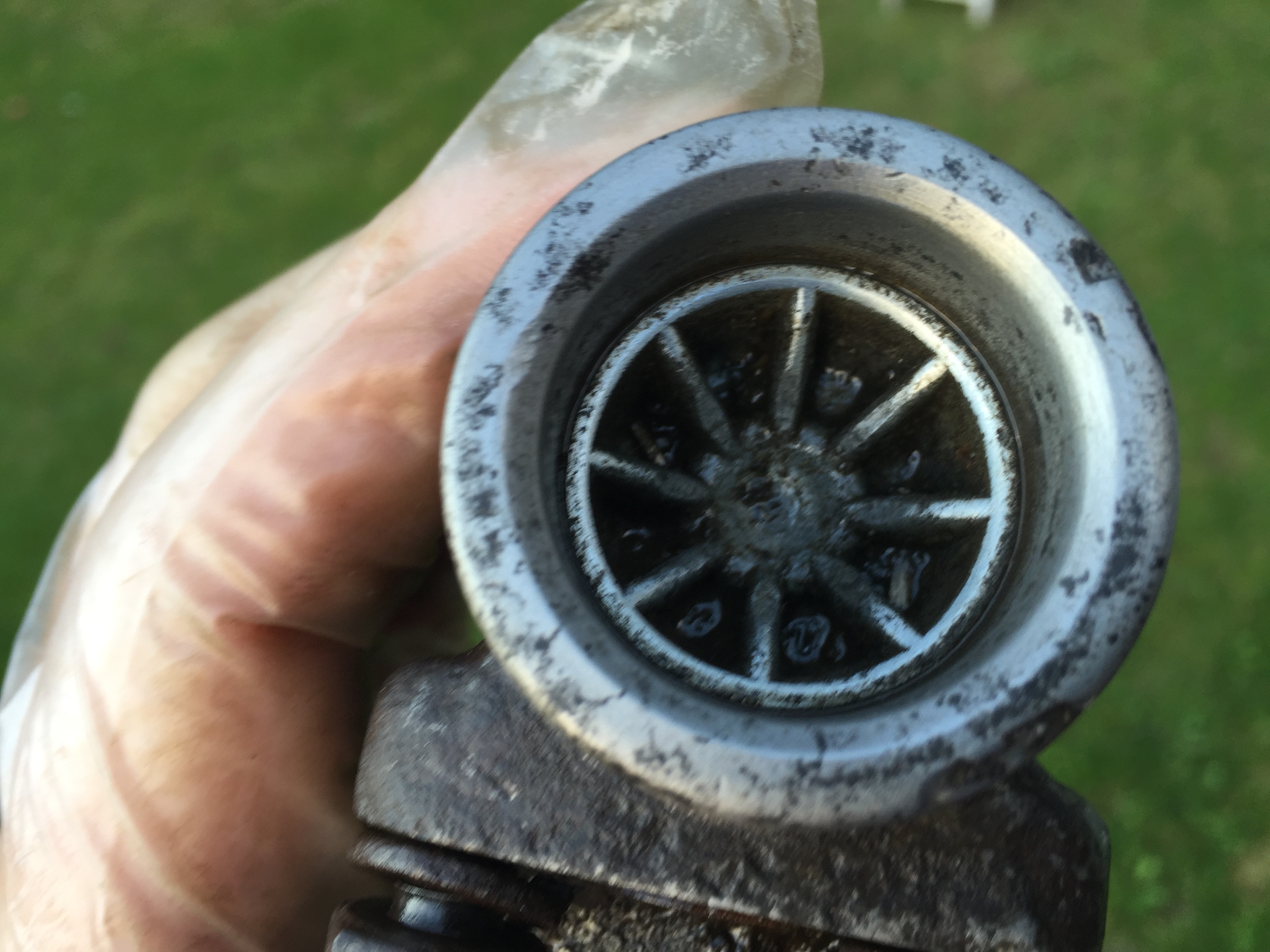 Next I used a small round metal hammer head in the piston center, and banged that with another hammer, the piston moved in but couldn’t go any further. I had to remove the brake bleed nipple but it was rusted in place. I tried using an 11mm spanner, no go, it slipped right off.

I decided to at least try, so I got a vice-grips, set it to as tight as I could, then whacked that with a rubber mallet, to my amazement the brake nipple moved, and I loosened it right off, no welder needed this time.

Once done, I connected my air-compressor to the freed hole and blew in some air, the piston popped right out along with the spring, rubber seal and bit behind the seal which had broken in the countless whacks received. 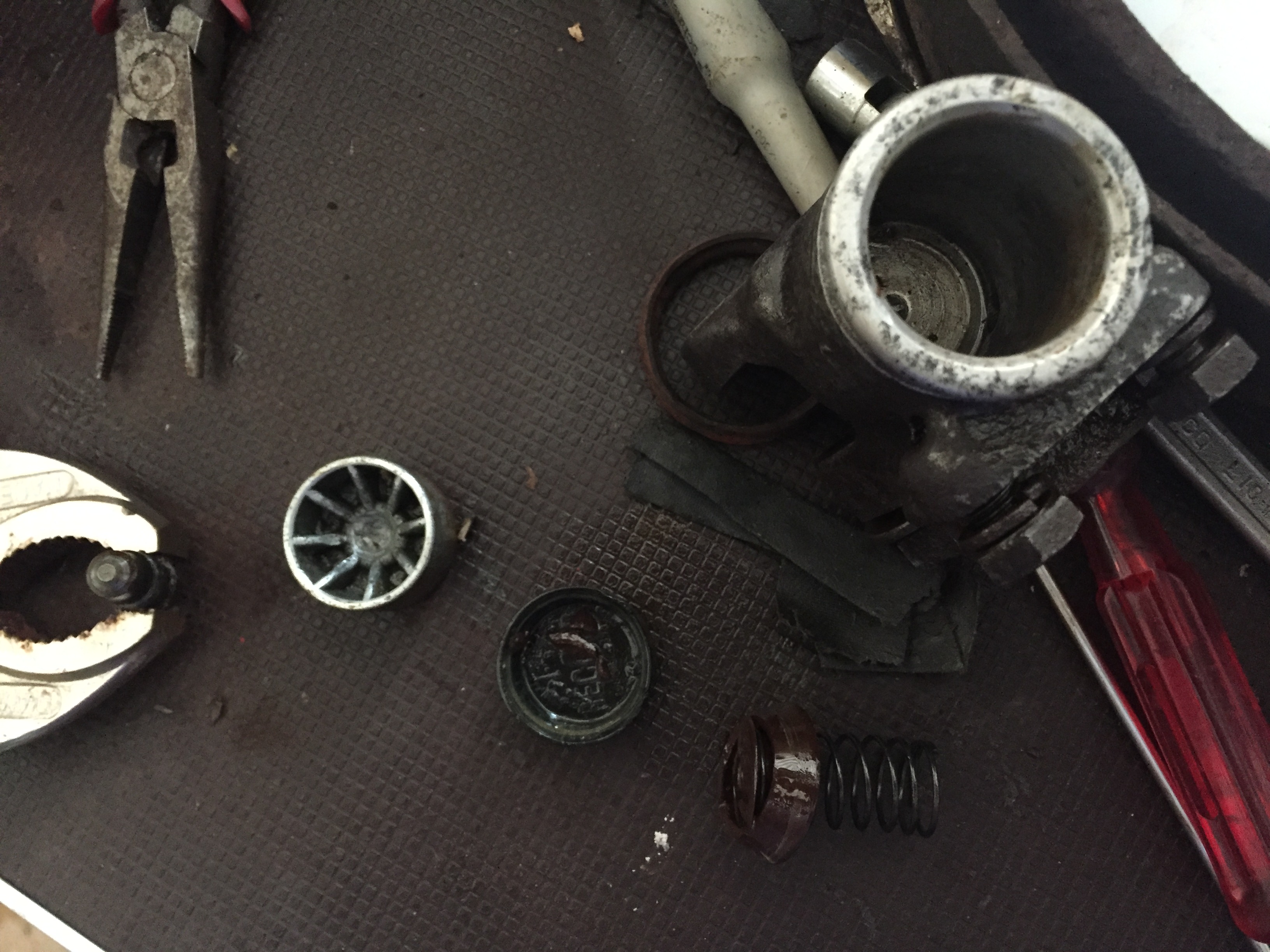 It’s ok though, this is what I needed to do to decide if I will proceed with this cylinder or not, and right now the inside of the cylinder doesn’t look too bad at all, I can hone it later and replace the innards with new bits and all should be fine (I hope).

Here you can see the broken bit that should push into the rubber seal. Bummer but I know this part is replaceable. 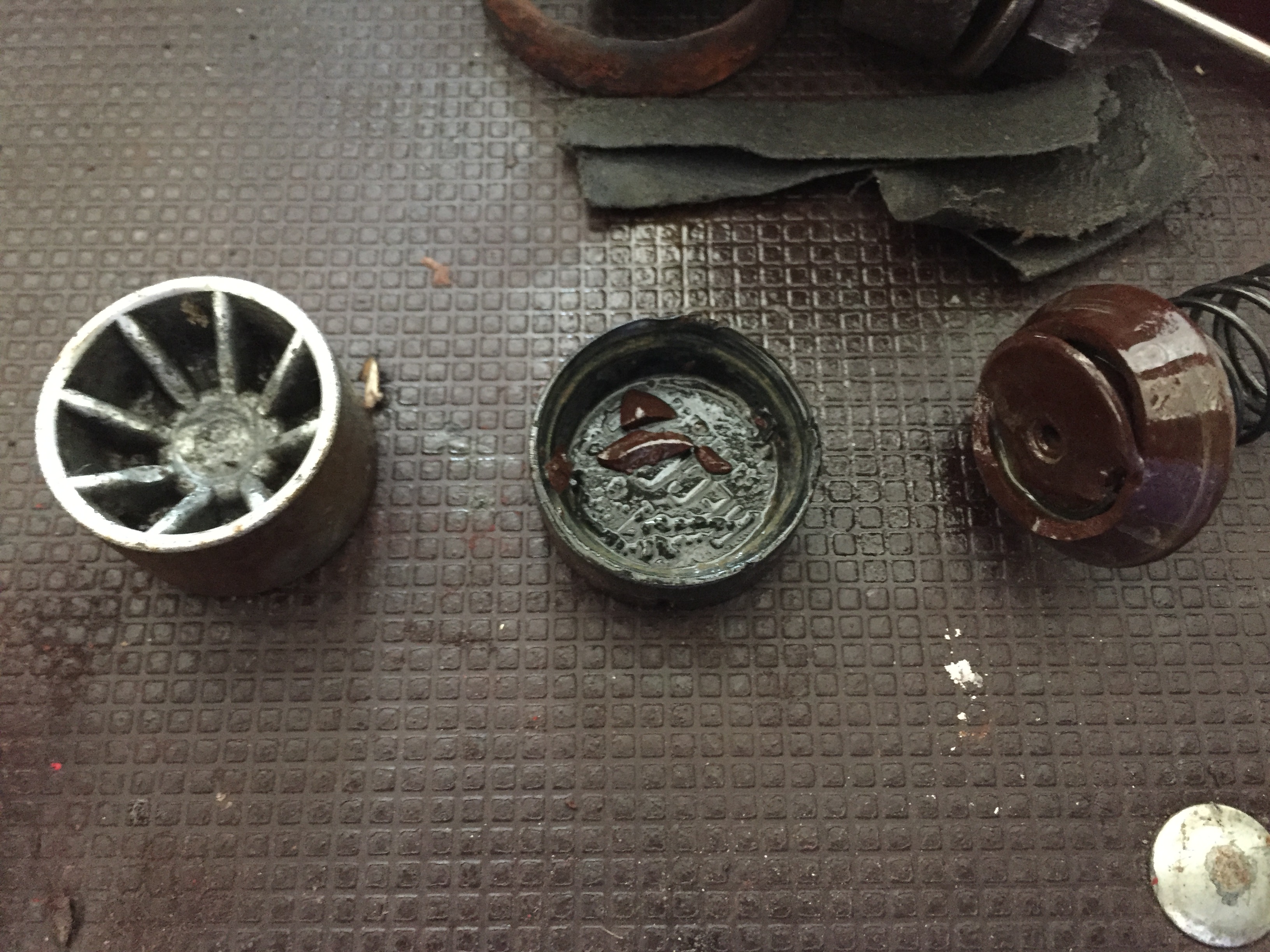 a closeup of the piston and rubber seal, they probably haven’t seen the light of day for 30 years or more, maybe even 56 years. 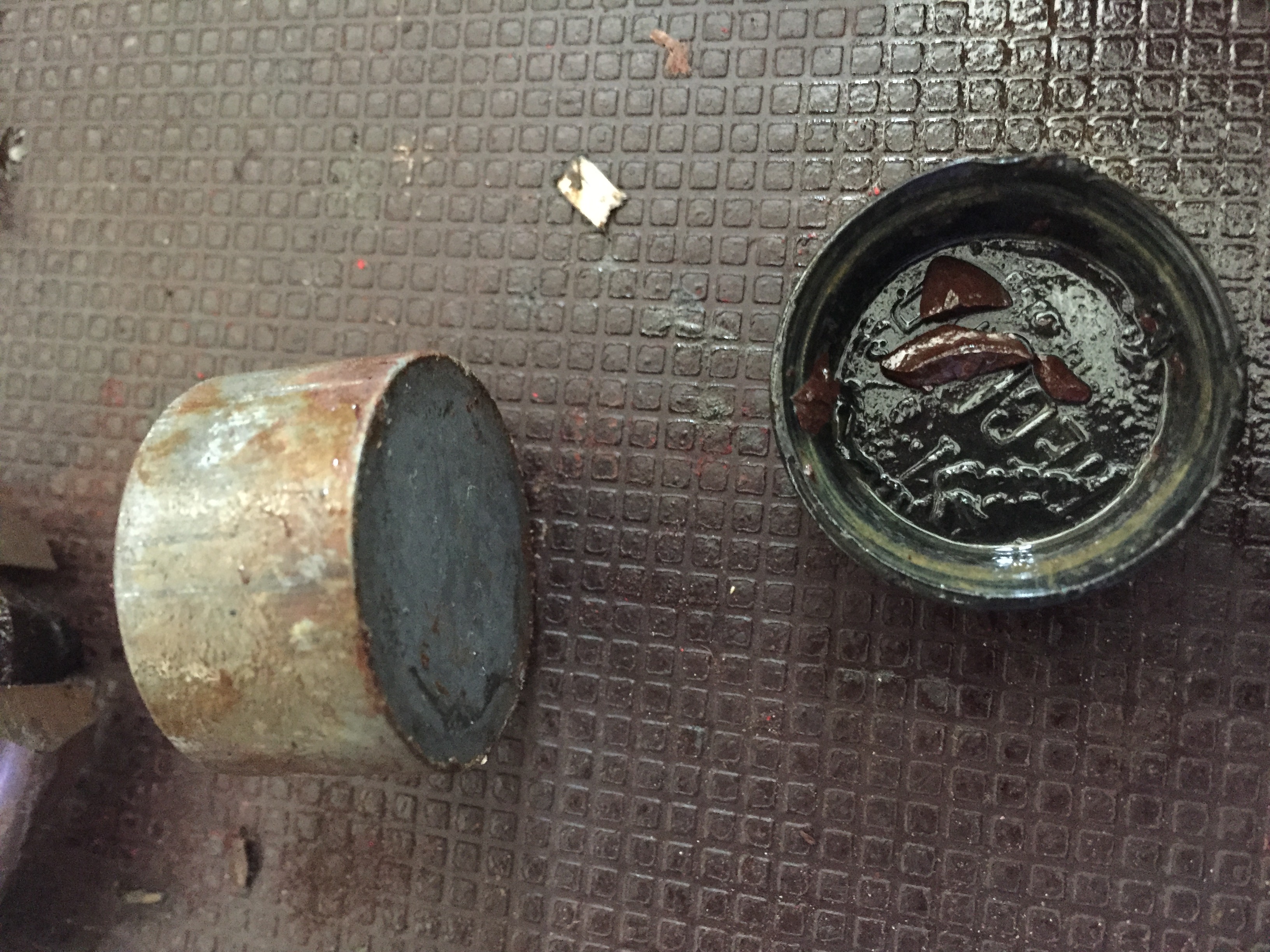 and here’s the brake bleeder I was talking about still stuck in the vice grip, I will replace all of these with brand new ones. 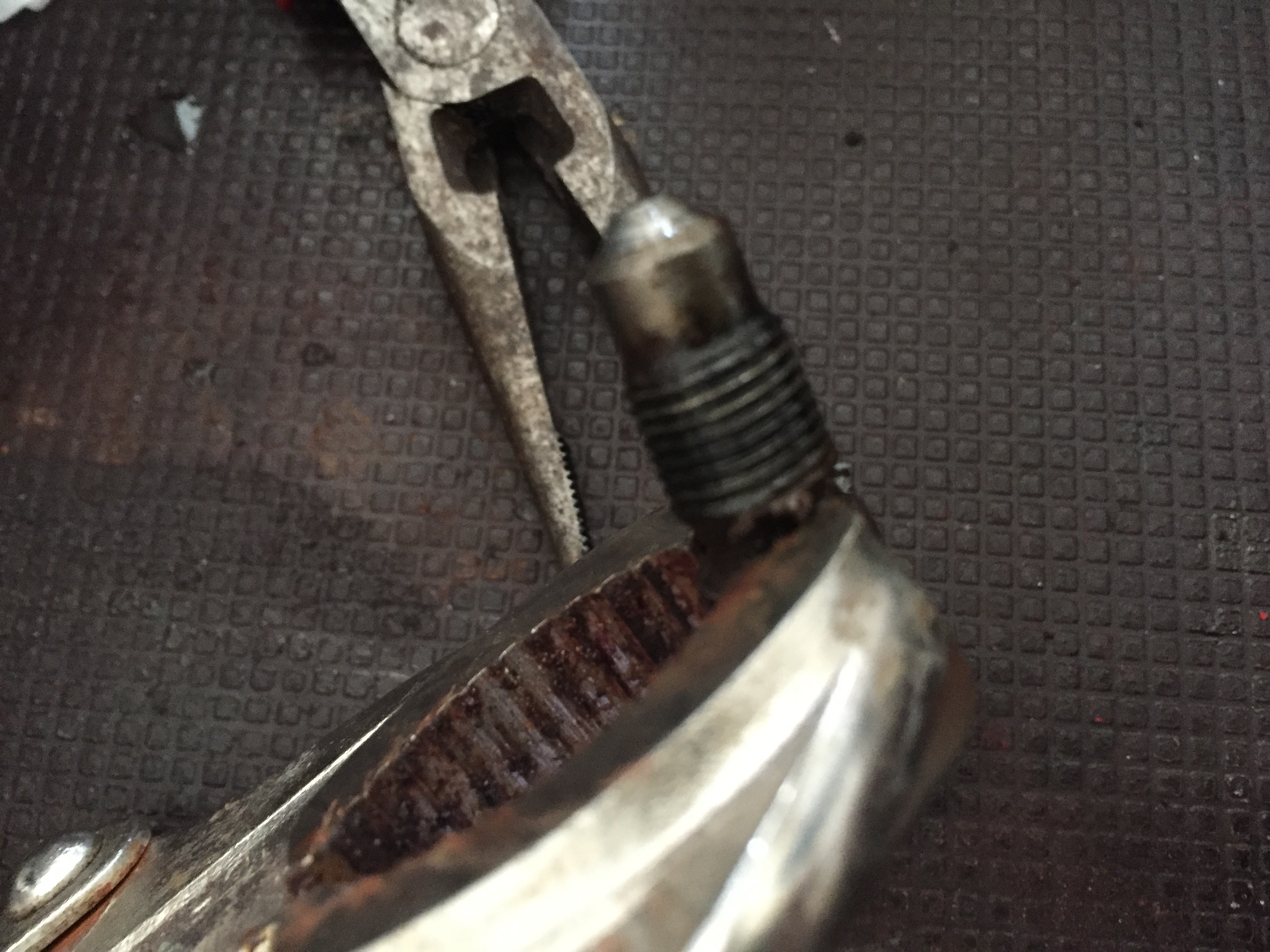 And finally, a closeup of the brake cylinder inside, not too bad and it’s not even honed yet, but you can see lots of rust still. 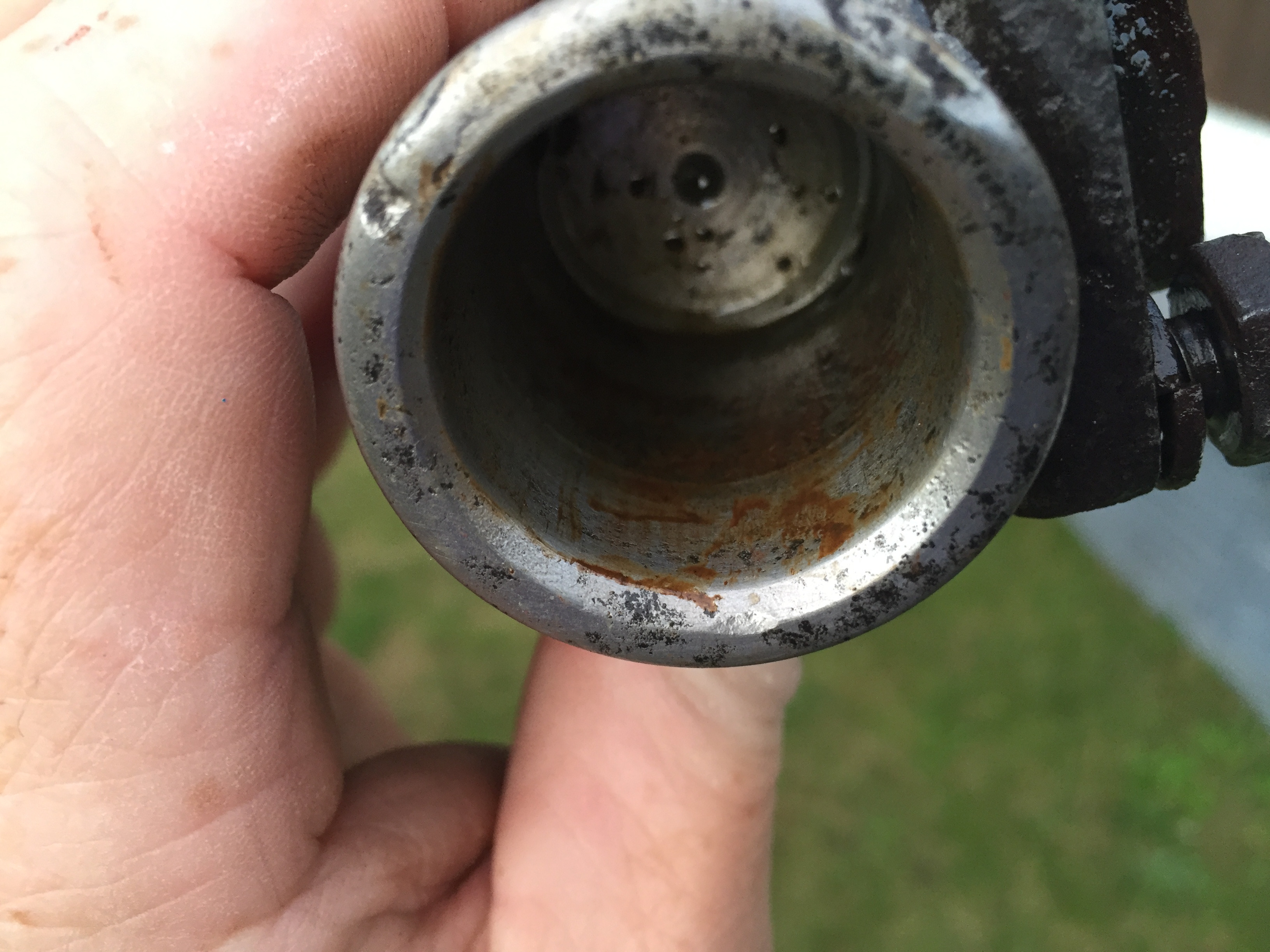 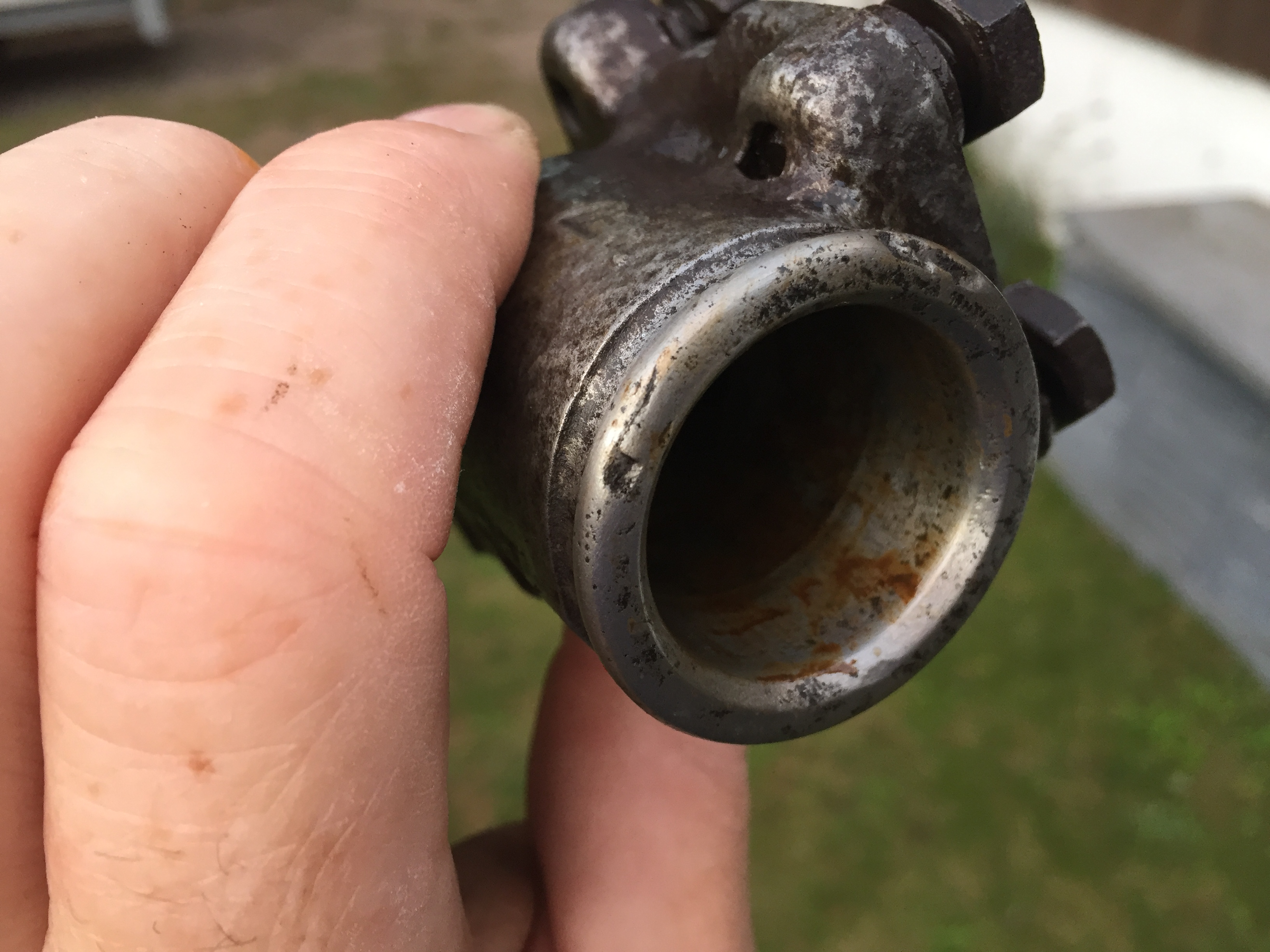 and here’s the back view, I covered one of these holes (can’t remember which one helped, but I know I tried both) with my finger when I connected the air compressor gun into the other hole, it worked, and ejected the piston. 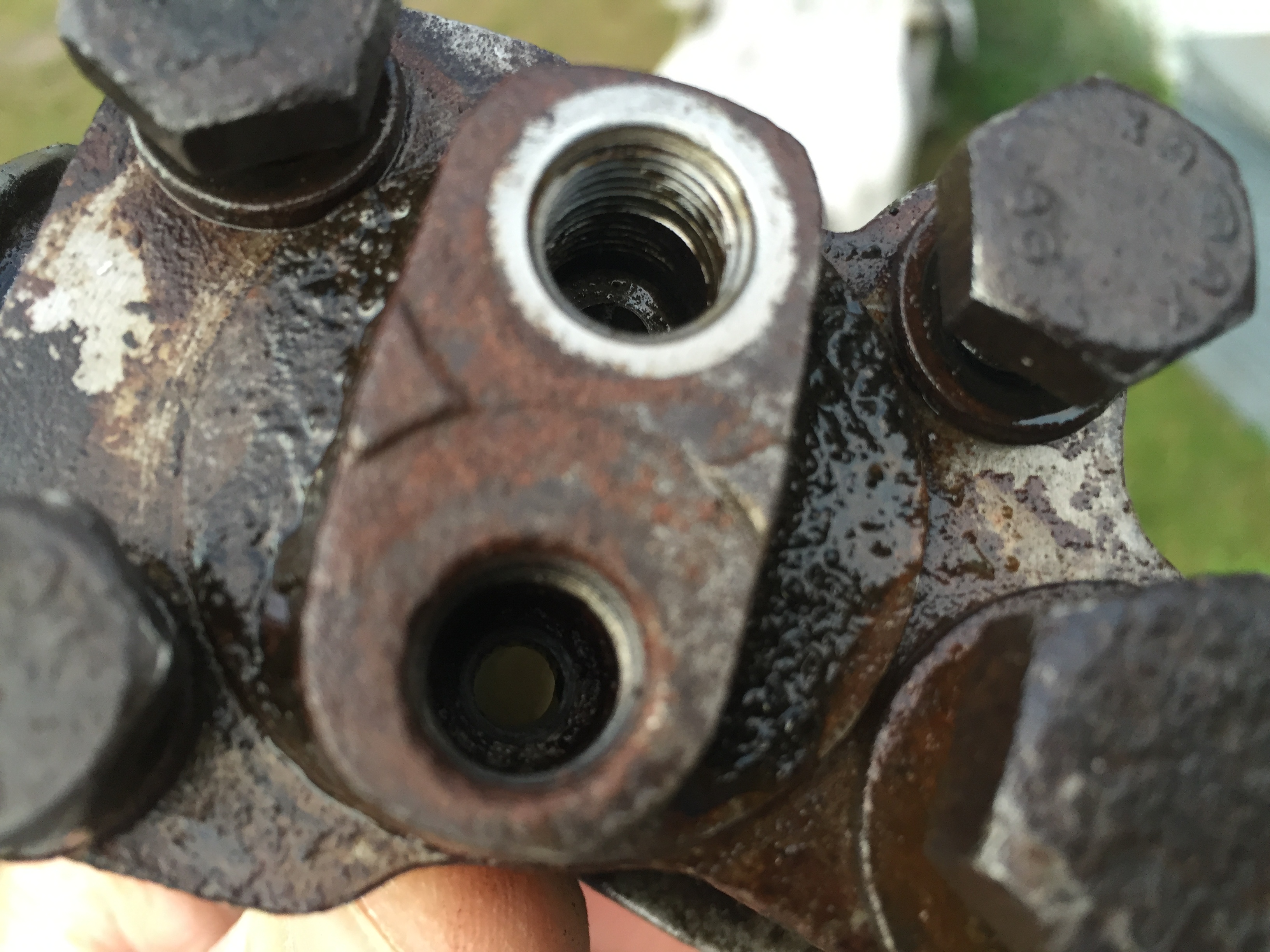 Now that I’ve the piston out I’ll order a replacement set of bits to fit what’s old and missing I found the following on ebay, hopefully it will work, it even includes the four brake hoses, so not bad value really. 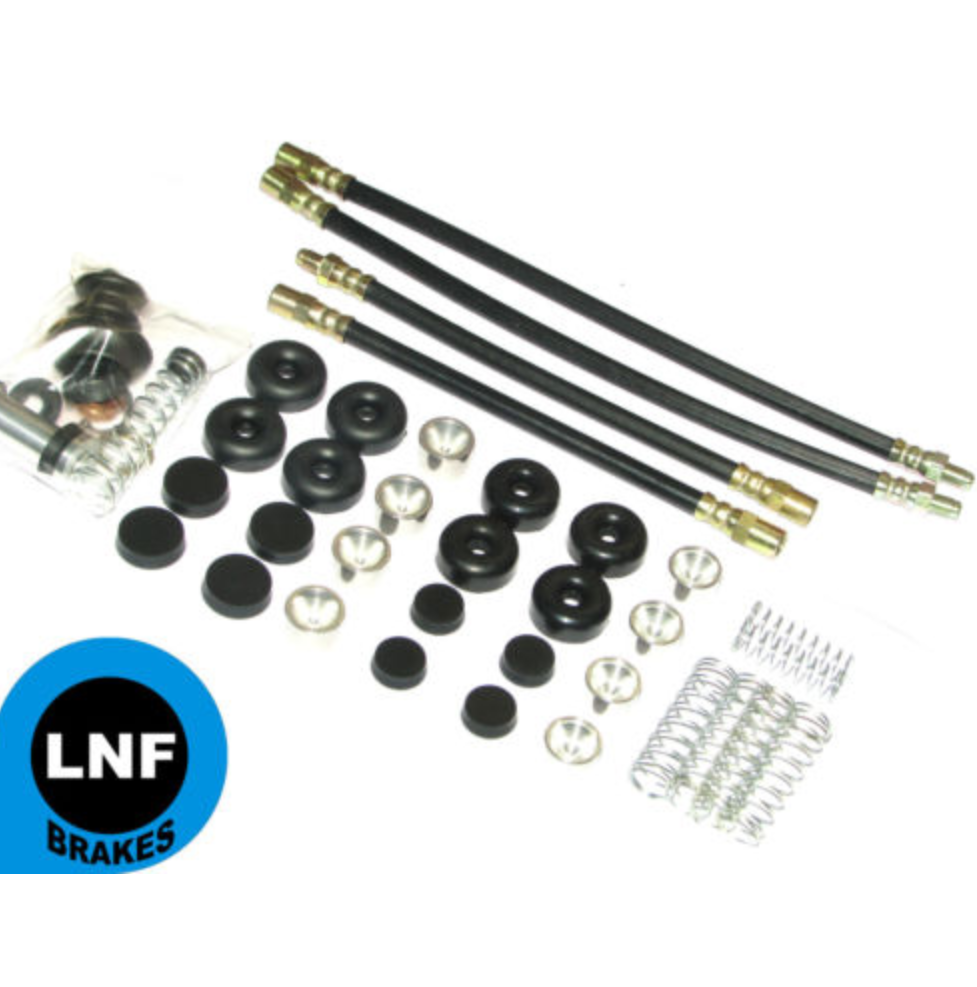 here’s a link to the bits I found on ebay and please note I’m not affiliated with them in any way, I’m just trying to fix my old car.